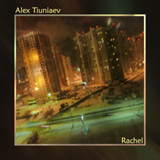 This short album of ambient/downtempo electronica is Alex Tiuniaev's tribute to masters of both science and science fiction.

About the album:
"Alex Tiuniaev is a composer, producer, and songwriter from Moscow, Russia. Besides composing ambient electronic music Alex also writes songs, plays the piano, flute and harmonica as well as some guitar. His most famous work is probably a 40-minute long experimental pieces entitled "I Knew Her" that was released back in 2008 to much critical acclaim. His work is also featured on netlabels such as Earth Mantra ("Somewhere in the Open Country", "Ethereal Winter Ambience") and Audio Gourmet ("On the Elusive Nature of Time"). His latest release is called "Blurred", out on Heat Death Records in 2012.

"Rachel EP" is Alex's debut on Webbed Hand. It features two short pieces of melodic ambient electronica that have been long in the making. "I Dreamt of Electric Sheep" is inspired by Philip K. Dick as well as Marconi Union. It's an urban steampunk experience build of soft bubbling synths, dreamy pads and various glitch sounds. "Thank you, Dr Sagan" is a tribute to the famous scientist and writer who many years ago kindled Alex's interest in space and physics. It's a sad yet uplifting piece of moody downtempo electronica.